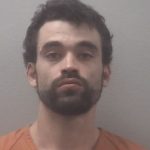 A Cayce man is charged with three counts of attempted murder after deputies said he fired a weapon multiple times toward a group of people on Lookout Point Road Feb. 24.

Justin Brylan Losoya, 25, is also charged with discharging a firearm into a dwelling and possession of a weapon during a violent crime, according to arrest warrants.

“Witnesses told our investigators they heard gunshots coming from the back of a house,” Lexington County Sheriff Jay Koon said. “When the witnesses asked the person responsible to stop firing a weapon, they said Losoya shined a flashlight on the group and fired a round that narrowly missed them.”

A bullet went through the bedroom wall of a nearby house, but the owner wasn’t home, according to deputies.

Losoya is being held in the Lexington County Detention Center.