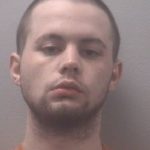 A Gaston man is charged with attempted murder after deputies said he pointed a weapon at his mother and rammed a car into the front of his parents’ Red Bank home Feb. 15.

Joshua Aaron Driggers, 21, is also charged with pointing and presenting, first degree assault and battery and malicious injury to private property, according to arrest warrants.

“It’s very fortunate that no one was seriously injured during this incident,” Lexington County Sheriff Jay Koon said. “Driggers initially left the home, but then turned around and drove toward the victims at a high rate of speed before hitting the front door area of the house.”

According to investigators, Driggers fled the area before they arrived. Deputies later found an abandoned 2002 Saturn SC1 that was determined to be the car used in the incident.