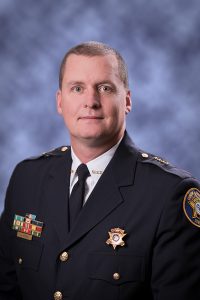 Sheriff Bryan “Jay” Koon was sworn in as the 39th sheriff of Lexington County April 24, 2015. Sheriff Koon began his law enforcement career as a reserve police officer for the University of South Carolina’s Division of Law Enforcement and Safety in August 1993.

In 1994, Koon began a 20-year career with the Town of Lexington Police Department where he served stints as a detective, patrol sergeant, watch commander, special operations lieutenant and assistant chief of police. Koon is also a 2008 graduate of the FBI National Academy (Session 235). In 2017, he also graduated from the 40th session of the FBI’s National Executive Institute. He successfully completed the 114th session of the National Sheriffs’ Institute, a program co-sponsored and funded by the National Sheriffs’ Association and the National Institute of Corrections to train sheriffs on the challenges facing law enforcement today.

Koon was asked to join the transitional leadership team for the Lexington County Sheriff’s Department by then Sheriff A. Lewis McCarty in June 2014.

Sheriff Koon is a 1990 graduate of Lexington High School, and a 1994 graduate of the University of South Carolina where he earned a Bachelor of Science in Criminal Justice. Koon is also a Leadership Lexington County graduate as well as an Eagle Scout. In 2021, he was awarded the Outstanding Eagle Scout Award, which is granted to Eagle Scouts who have distinguished themselves in their life work and who have shared their talents with their communities on a voluntary basis.

Sheriff Koon and his family are members of Saxe-Gotha Presbyterian Church. Koon resides in Lexington with his wife Kim, a middle school teacher, and their two children.