Three teenagers were taken into custody Thursday after deputies said they drove a car reported stolen out of Columbia to a Lexington County subdivision and tried to steal another car. 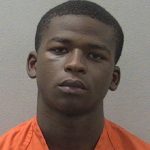 James Rasik Edward Ross, 17, is charged with grand larceny and possession of a stolen vehicle, according to deputies. Two juveniles face the same charges.

“Based on the information we’ve gathered during our investigation, the three suspects were trying to steal a car from the 700 block of Lansford Bay Drive when they encountered a homeowner and ran away, leaving the stolen car they’d used to get there.” Lexington County Sheriff Jay Koon said. “Residents of the neighborhood and nearby businesses were very helpful to us as we worked this case throughout the morning.”

The stolen car was returned to its owner, according to Koon.

Ross is being held in the Lexington County Detention Center while he awaits a bond hearing. The two juveniles were transported to the South Carolina Department of Juvenile Justice. They will appear in Lexington County Family Court at a later date.