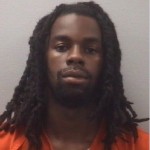 Two suspects have been arrested on multiple charges related to the incident.

Investigators say Howell, Robinson and a third suspect entered a home in the 500 block of Fallaw Road during the early morning hours on July 12 and robbed multiple victims of money, cell phones and firearms.

Anyone with information about the third suspect should contact the Lexington County Sheriff’s Department at 803-785-8230 or Crimestoppers at 888-CRIME-SC. Anonymous tips can be submitted at www.lexingtonsheriff.com.