A Lexington man surrendered to Lexington County deputies about 1:30 this morning after being holed up in his motel room during a standoff that lasted more than four hours. 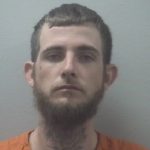 Deputies received a tip 29-year-old James Slaton, who was wanted on a grand larceny arrest warrant out of York County, was staying at the Red Roof Inn on Berryhill Road Saturday night. A deputy tried to make contact with Slaton at the motel room about 9:00 last night, but Slaton refused come out. He made threats to hurt himself and law enforcement officers before ending talks with deputies.

After numerous unsuccessful attempts to contact again with Slaton, a tactical team and negotiators were activated at the motel. Deputies evacuated several rooms around Slaton’s room and secured the motel property.

Negotiators eventually made contact with Slaton, who was in his room alone, and he agreed to give himself up. He was arrested without incident and transported to the Lexington County Detention Center.