“The foundation’s goal is to help support our mission of serving and protecting the people of Lexington County,” Sheriff Jay Koon said. “We’re very grateful the foundation highlights its commitment to maintaining the professional standards of our department by providing resources and holding supportive events.”

Koon said the foundation helps provide funding for equipment, training and other supplies to assist deputies and correctional officers in carrying out their duties.

The foundation presented the following awards Thursday night during its annual awards banquet: 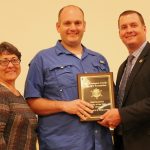 Treaster received his award for his eagerness to serve multiple, time-consuming roles. In addition to his role as a patrol sergeant in the department’s west region, Treaster is a team leader on the Crisis Negotiations Unit and coordinator of the Large Animal Response Unit. These collateral duties often result in overtime and extra work that Sgt. Treaster willingly fulfills. During the final months of 2017, Sgt. Treaster helped with an investigation into vehicle break-ins, successfully negotiated a peaceful resolution with a barricaded subject and arrested a driver who was driving a stolen car full of stolen property. 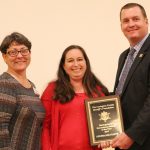 Floyd has served the Sheriff’s Department for more than 14 years. In 2017, she oversaw the opening of a new housing unit that reduced the number of inmates in other units. Floyd also started LCSD’s first inmate worker program for females and managed the cleanup of the facility during an accreditation assessment. Floyd’s daily responsibilities include overseeing detention center programs and ensuring inmates are given the tools necessary to be successful after release. Her passion shines through in her enthusiasm for all that she does, even when it goes above and beyond the normal duties. 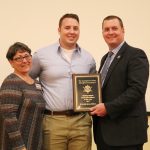 Halfhill first stood out while attending the South Carolina Criminal Justice Academy by receiving the “Top Shot” award as the best marksmen in his class. From there, Halfhill has continued to show professionalism, an eagerness to learn and dedication to the department. His sergeant says he’s served multiple arrest warrants and has conducted patrols in areas of high crime in an effort to remain proactive. Before Halfhill went to the academy, he helped by working in evidence, temporarily setting aside his own goals for the greater good.

Taylor’s workload as the paralegal support to the agency’s General Counsel and Internal Affairs divisions continues to grow in volume and complexity as laws change. Her position requires her to work with all three bureaus of the agency as well as the public and attorneys. Despite all this, Taylor is able to accomplish her duties in a timely and professional manner. 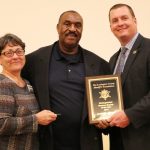 While working as a school resource officer at Saxe Gotha Elementary School, Moore observed a child in distress during lunch. He quickly determined the child was choking and began life-saving measures. After several attempts, the food was dislodged from the child’s airway. If not for Moore’s quick action, the situation could have had a very different outcome. 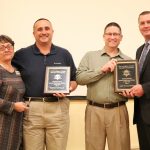 A school resource officer has many duties that extend far beyond keeping students safe. Oswalt and Wilkerson are consistently praised by Irmo High School staff for being level-headed and reliable. Their efforts are credited for reducing larcenies at the school by more than 50 percent. On top of that, the mother of an autistic student who will graduate in 2018 said Oswalt and Wilkerson’s positive attention and mentorship empowered her son to defy all expectations. 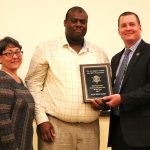 Williams has been the Dixiana resident deputy for nearly two years. In this time, Williams has performed many enforcement-related tasks as well as the more nontraditional roles that his position requires. In addition to helping with crime suppression efforts, Williams organized his area’s National Night Out event, helped conduct two parades, participated in a Special Olympics fundraiser, coordinated LCSD’s role in the Congaree Kid’s Kamp and worked with a local nonprofit, The Nehemiah Project, to provide a safe space for children in the Bell Meade community. 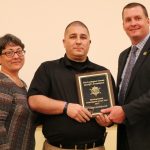 Out of his 163 cases in 2017, Burbage solved 49 by arrest. His clearance rate of 42 percent stands far above the national average. Burbage’s attention to detail led to the identification of a suspect connected to 10 victims. When deputies made the arrest, the suspect had credit cards and banking information in his possession that led to identifying even more victims. Burbage’s role requires him to stay on top of ever-changing crime trends to be a successful white collar investigator. 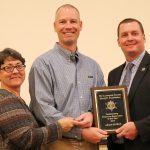 Spires has served as a road patrol sergeant for more than two years. Sgt. Spires has consistently received praise for his ability to patiently train and challenge his team. In February 2017, Spires’ shift responded to two shooting incidents that required him to manage the scene, assign deputies and resources, and aid investigators in identifying suspects. In April, he helped manage a peaceful resolution of a barricaded subject and in December, his shift responded to a fatal stabbing. Spires is also a member of the LCSD Honor Guard which requires monthly training and attendance at special events. 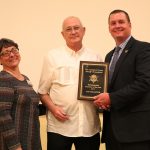 Volunteer of the year: Tim Treaster

Treaster has prepped and donated meals for the Negotiation Team training, Explorer Post’s Scrappin’ with the Law fundraiser as well as other department meetings and events. Treaster constructed a speaker box that allows SWAT and negotiators to safely resolve standoff situations. He also donated his land to house several animals that did not have a place to go and volunteered time, equipment and materials to help rebuild the Pelion Town Park and Playground. His selflessness has made a difference not only at LCSD, but to the county as a whole. 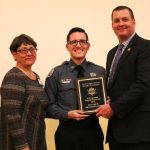 Explorer of the year: Matthew Braeckelaere

Braeckelaere joined Explorer post #106 in 2015 and has displayed a positive attitude and eagerness to serve, often volunteering first to help out at events. His full-time job at Wright Johnston Uniforms allows him to interact and assist law enforcement and public safety officials from all over the state. His dedication to criminal justice and the law will soon be continued at Midlands Technical College. 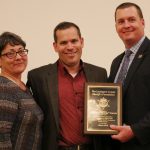 Foundation board chair Becky Dickson also presented Jonathan “Bubba” Garris with an award from the board for playing a vital role in planning recent awards banquets, fundraising and his dedication as a liaison between the foundation and the Sheriff’s Department. 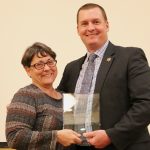 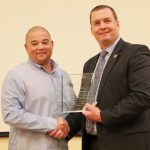 In addition to these annual awards, Sheriff Koon presented awards to Dickson and outgoing board member Brandon Jeffcoat for their service and dedication to the members of the Lexington County Sheriff’s Department.